If there’s one thing we would like to make sure of, it would be the purity of our drinking water. While our city water systems have built-in filtration and purification features, water contamination may still occur.

We must make sure that our drinking water is free of different contaminants—chemicals, dirt, viruses, and most notably, harmful bacteria. This is because this kind of bacteria can cause significant health concerns. One of the most common bacterial contaminants that you can find in water is E. coli.

If you are looking for a filtration system that can protect you from the wrath of E. coli, you may want to consider Reverse Osmosis water system.

But does Reverse Osmosis remove E. coli? The short and simple answer to this question is yes. According to the Centers for Disease Control and Prevention, Reverse Osmosis water filtration systems are considered to be effective in removing bacteria, especially E. coli.

Reverse Osmosis System starts by applying pressure to water. It facilitates the water to pass through a membrane responsible for filtering the water. The filtration process is made of three stages. These are as follows:

The principle behind this process is pretty simple. Sizes of bacteria range from 0.4 to 1 micron while viruses have a size range of 0.02 to 0.4 micron.

Because they are bigger, no viruses or bacteria can be able to pass through the membrane. They are then filtered out, ensuring that the water you will get is completely safe and healthy for drinking.

The truth is, E. coli is a common bacteria found in the digestive systems of both humans and animals. Often, the presence of this microorganism is not a cause for concern, but some strains may cause a few health problems when ingested.

One particular strain that we should shy away from is the E. coli O157: H7 as ingestion of this strain may cause bloody diarrhea, cramps, and vomiting. Other severe symptoms include fever, bleeding, seizures, confusion, adult, and pediatric kidney failure.

Another E. coli strain to look out for is the STEC or Shiga toxin-producing E. coli, which can damage the linings of your intestine.

Aside from food poisoning and digestive system issues, it has also been noted that 75 to 95% of urinary tract infections are due to E. coli infection.

More than its health implications, the presence of E. coli in the water is a shred of clear evidence that the water supply is contaminated with animal waste. In the US, the water source will be deemed unfit for consumption if the water sample reveals the presence of the said bacteria.

Other Bacteria that Reverse Osmosis Removes

Aside from E. coli, what other bacteria does reverse osmosis remove?

The Centers for Disease Control and Prevention states that Reverse Osmosis is also highly effective in removing Salmonella, Shigella, and Campylobacter. These bacteria may cause a wide array of health problems. These are as follows:

This is the culprit behind the bacterial disease called Salmonellosis, which has the following signs and symptoms: vomiting, nausea, fever, chills, diarrhea, abdominal cramps, blood in the stool, and headache. There are also aggressive strains of Salmonella that may cause typhoid fever.

Shigella is the bacteria that causes the disease called Shigellosis. Aside from drinking contaminated water, you may also contract this infection by ingesting contaminated food or when you come in contact with contaminates feces.

The signs and symptoms of Shigellosis are abdominal cramps and pain, diarrhea, and fever.

Typically, Shigellosis is harmless and may last only for a few days. But there are cases when this disease may cause a few complications including dehydration, seizures, toxic megacolon, rectal prolapse, reactive arthritis, and hemolytic uremic syndrome.

The last bacteria that Reverse Osmosis removes is Campylobacter, the bacteria responsible for causing the intestinal infection called Campylobacteriosis.

This water filtration system is also effective in removing viruses like Norovirus, Enteric, hepatitis A, and Rotavirus.

The presence of E. coli in water, even in low amounts, should be a cause of concern for all homeowners because it indicates water pollution. No matter how efficient our water systems are, contamination may still take place. 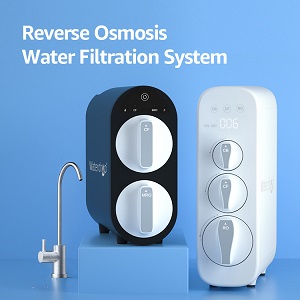 Reverse Osmosis Vs. Distilled Water: Which is the Best Option for You?

Are Memory Foam Pillows Worth The Money?